Monster High dolls were originally produced with a small loop of elastic which attached the legs together at the hips. This elastic often snapped due to rough play, simple wear and tear or the old plastic pegs that the elastic was looped around broke.
This problem was resolved after, and including, Toralei's first release, when a new plastic peg system was introduced.

However, older dolls' legs are still falling off!
If you receive a faulty product there are often helpline numbers where you can ring the company and a representative will offer a solution. My personal experience of Mattel UK customer services is that it is somewhat lacking, and they generally say 'sorry, there's nothing we can do' unless the doll is in production right then and they may send out replacement shoes/accessories, so broken legs is a different story.

Instead of trying to sell the doll on, or even throw it away, try fixing it up!


To fix broken pegs and snapped elastic this is what you'll need:

-1mm/2mm drill bit (or smaller/larger depending on the size of the metal dowel, but I wouldn't suggest going larger than 3mm as it may compromise the structural integrity of the plastic)

-Metal dowel/thick jewellery wire/thick plastic dowel (this is the part which will replace the broken white plastic peg.)

I was silly and forgot to take pictures of the actual beginning part.. Whoops!

Anyway, I'll try and describe the process as much as I can and add some sketches.

Take out whatever you'll be using to replace the peg. I used some mild steel 1.5mm dowel.

Line it up where the old peg was and cut the ends so once inside the leg, will fit flush with the plastic. (Red = new peg. Black = cut here) 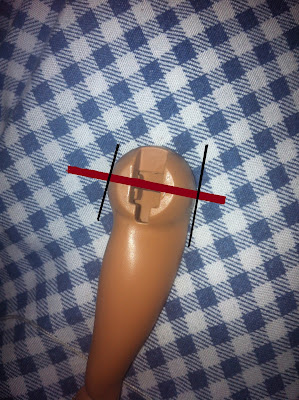 Take your leg with the broken peg, and mark on the outside of each side of the thigh where the old peg sat. I used a pointed file to dig a small hole in the plastic where the drill could sit.
You want to drill through each side, and through the existing peg holes so it lines up perfect.

These marks often sit near or on the seam lines of the plastic. 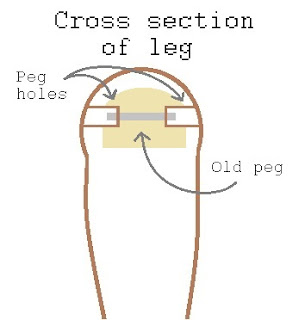 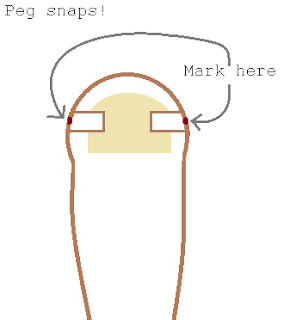 Clamp the thigh into the vice. Use a towel or tissue paper if you're worried about the vice marking the plastic.

Make sure the drill-bit is lined up straight in the drill and use a slow speed so you don't shred the plastic up. Line the drill up with the marked area, and the desired exit I.E The existing hole where the old peg sat.
Drill slowly, increasing pressure until you feel the drill exit the hole. 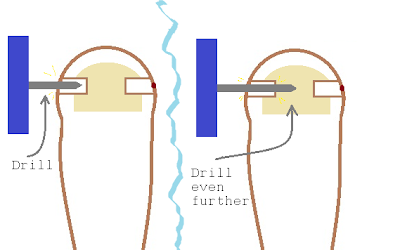 Remove the drill and make sure the hole is large enough to accommodate the dowel snuggly, but not large enough that it's rattling about. If you drill a hole too large, you'll have to plug it up with epoxy or something, leave it to cure and try again with a small drill-bit, or just use a larger dowel. 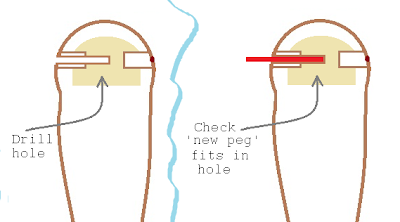 Place the drill back in the new hole, through the other side to the existing hole and keep drilling until you have one continuous tunnel, aiming to have the drill exit on the other side of the leg where you marked it. 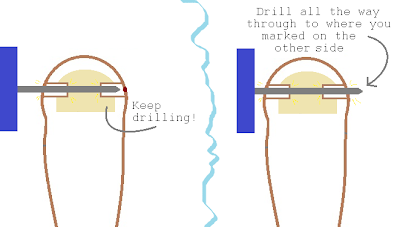 Push the new peg through the hole, hopefully it fits smoothly. If it gets caught on pieces of plastic/the hole isn't flush/things don't line up, run the drill through it again very slowly, or use a needle-file to smooth things out. 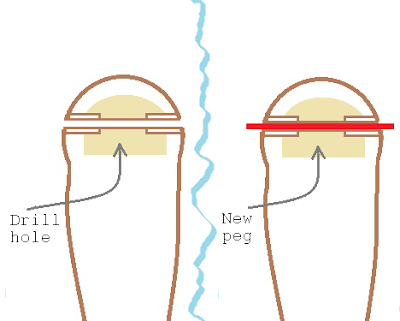 If the new peg fits, but is too long at the sides, trim and file it down.
It should end up looking like this! 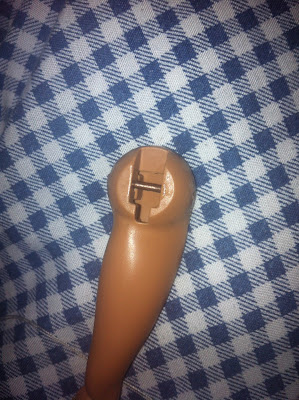 Take your strong glue and use a small brush or nozzle to make sure the dowel is secure. Leave the glue to dry, preferably overnight. I even glued round the edges of the holes to be safe. 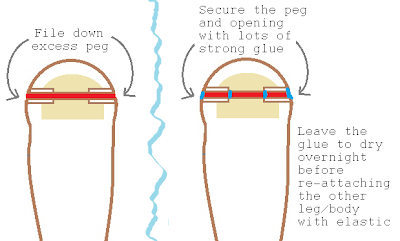 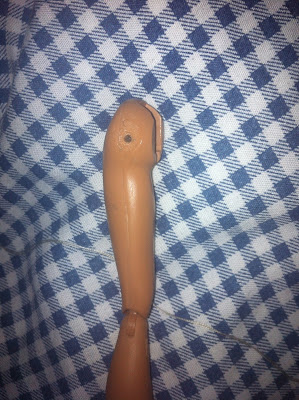 And you're all done! Ta-da!
Now to fix the legs back to the body.

In some instances, the old elastic may still be sewn in a loop around the other leg's peg.  Simply snip this off as it's pretty useless and you'll need to free up the space (careful not to cut the peg off too!)

Take your length of elastic material. Make sure you have at least 25cm to give you plenty of manoeuvring space (you'll trim it down once you've finished sewing.)

Push one end of your elastic through the gap between the top of the peg and the leg. Push it down past the peg. 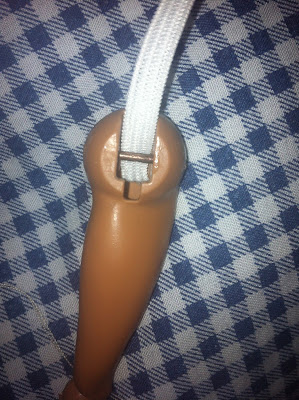 Use tweezers, a pin or needle like in my case to hook the elastic and pull it under the peg and out the other hole. 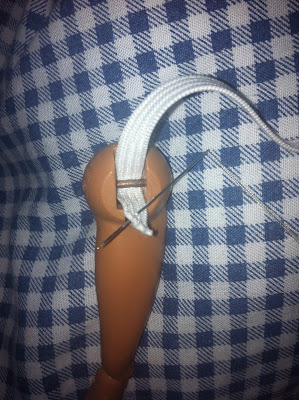 Bring the elastic through the hole more and pull it so the lengths even out. 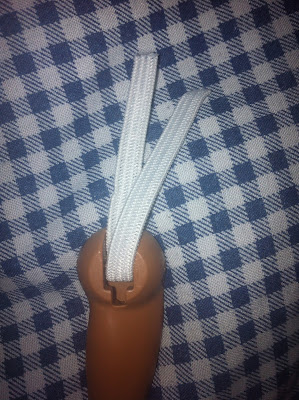 The clear rubber spacer comes in 2 halves and sometimes these don't quite match, but a bit of wriggling them about lines them up.
Take both ends of the elastic, and push them through the small ready made slit in the clear rubber spacer. (Green = this way. Red = gap between the spacer halves) 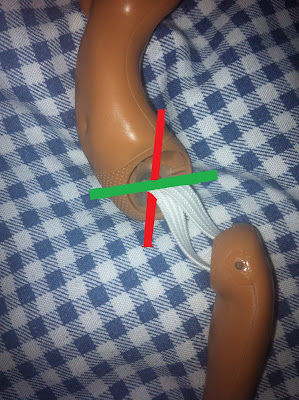 Make sure you're putting the correct leg on it's correct side of the body! Don't want to finish sewing and realise the doll has her legs on backwards! 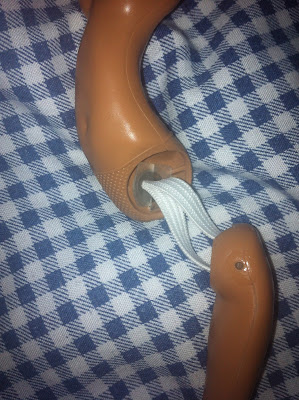 Push the elastic through the gap. 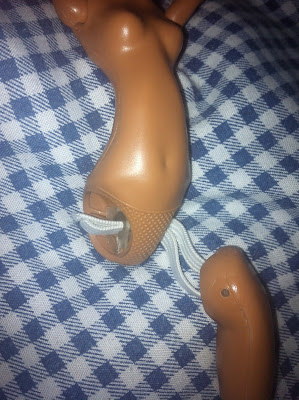 Pull both ends of the elastic until the leg is tight against the body and rubber stopper. 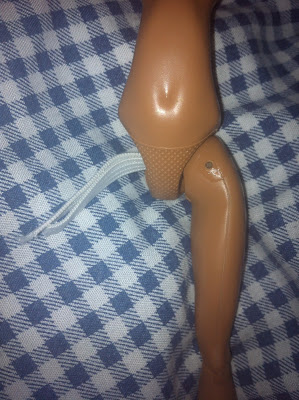 Repeat the process of pushing one end of elastic through the leg and loop it around the peg. Careful how hard you pull on one end of the elastic; I had to start over again a few times because the other end went back through the rubber stopper and unlooped itself when I wasn't paying attention! 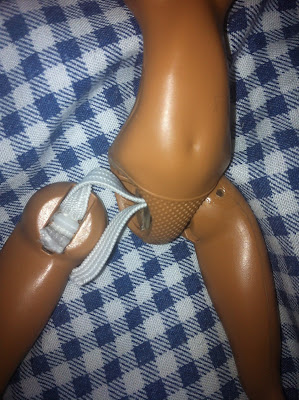 Pull both ends of the elastic tight. Sew as close as you possibly can to the peg, so your legs don't end up loose and wobbly.
I went over the same area a few times to make sure the thread was secure and the elastic loop wouldn't come loose. 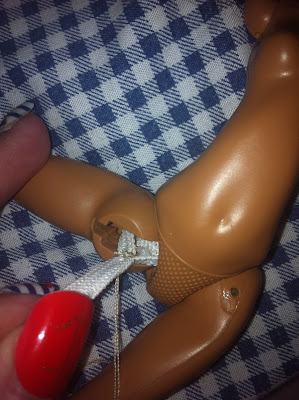 When you're satisfied that the elastic is taut, knot the thread tight and trim off the excess elastic.
If the threaded/sewn part of the elastic hangs in the way of the joint, it can be tucked into the open part of the leg, which is circled below, to make it tidier and less obtrusive. 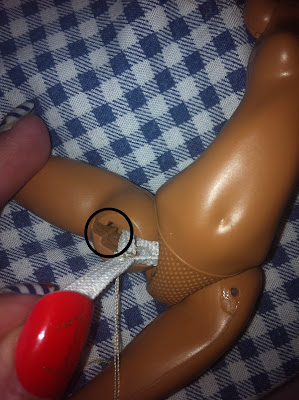 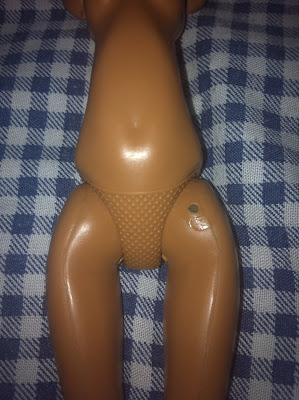 Disclaimer: This is not an official guide, simply a way that helped me to fix up my broken dolls. I cannot be held responsible for damaged caused by you following this blog post to fix your own or other people's dolls. Younger readers must have the permission, supervision and help from an adult whilst using power-tools and sharp pins/needles/scissors.
Posted by Athena Power at 13:31

I'm Nuu!
I'm 21, living in the UK and spend my time eating, sleeping and playing with dolls (the rest of the time I do important grown-up stuff like working and cleaning up)
I love dolls, cats, Sailor Moon and sewing.

Toys and dolls have been a lifelong passion for me and I love throwing myself into all the little details that goes into their craftsmanship and design.
I've decided to go through a huge range of dolls; reviewing their pros and cons, quality, design, appeal, retail price, packaging and everything in between!

I review brand new releases, old classics and sometimes weird little-known brands to mix things up a bit!
As well as collecting and reviewing dolls, I modify them. I strip them down to base parts and then repaint faces, reroot hair, sew clothes and make new accessories and props for them! Occasionally I'll post my methods of customising dolls and the final products.